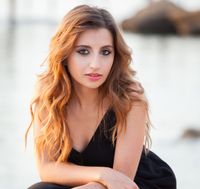 Award winning Italian singer, songwriter Chiara Izzi is described by Jazz Times as “a talent to be heard, admired and anticipated” after the release of her debut album “Motifs”. She is currently living in New York and performs regularly around the city in prominent jazz clubs and venues. Chiara’s International debut took place at the Montreux Jazz Festival Vocal Competition in 2011, where she was awarded first prize by the living musical legend Quincy Jones.